The word INFRASTRUCTURE means a lot of things to a lot of industries. It has become an 'umbrella' word used to describe basic needs. Maintaining the inland rivers, ports and terminals infrastructure to a sustainable system of reliability and performance in that commercial vessel operators can, cost-effectively and environmentally, transport bulk commodities, such as coal, petroleum, chemicals and grain is a key challenge within the context of competing federal priorities and limited resources. Our Nation’s backbone, its ability to survive and compete globally heavily depends on America’s ports and terminals. The word infrastructure to inland rivers, ports and terminals means:

Courtesy of Maritime Administration, the image to the right, shows much of the infrastructure you will find on port or terminal property.

We hear so often for the need of infrastructure investment. So, what does that mean in the port and terminal industry and who is responsible for what? 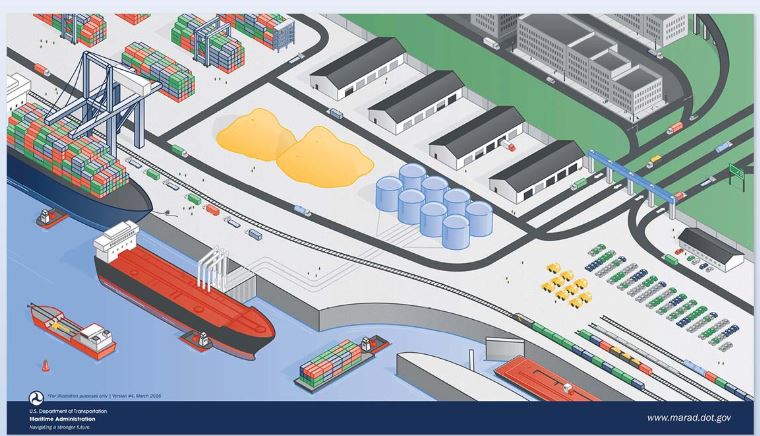 Port and Terminal Infrastructure - Who Does What

Port infrastructure will vary from port to port and region to region. After all, if you’ve seen one port, you’ve seen one port. In general, ports are public entities that maintain fixed assets to be accessed by river, road and rail for the movement of goods. An integral part of the transportation system, public ports are economic engines, public assets and utilities and stewards of port activities that have ownership, right, title and interest of property for some public benefit. For example, the Army Corps maintains the river, but the port maintains the dock accessing the river. In another example, the State maintains the highway leading to the port, but the port maintains the roadway inside port boundaries accessing the highway. In many cases, the port maintains the dock, fixed handling equipment, roadway, rail, pipelines, utilities, technology, insurance, security and land.

Some public ports do operate their own transload functions instead of leasing the transload function to a third party (private terminal). In cases as such, the operating public port maintains all assets necessary including material handling equipment (fixed or mobile cranes, attachments, winches, conveyors, loaders), storage (inside and outside), scales, buildings, technology, insurance and security.

Publicly owned port property is expected to meet a rate of financial return.

This is where it all gets confusing.

Using the stair-step approach of locks on the river, the U.S. can deliver goods more competitively than competing countries. The U.S. Army Corps of Engineers operates and maintains the river, operates the locks, and performs dredging activities (you can dive into all authorized purposes here). Maintaining the national river system requires teams of divisions comprised of both military and civilian staff incorporating leadership across multiple (and in some cases, competing) areas of focus (flood control, navigation, ecosystem, hydropower and more), engineering, labor and more.

The Army Corps operates and maintains 239 lock chambers at 193 lock sites. Most of those locks however, still at the 600’ chamber length. Some sites offer the standardized 1200’ chamber, which allows a full 15-barge tow through. At the 600’ lock, the tow must be broken in sections to transit fully through the lock, thus causing delays and congestion. Funding to rehabilitate or modernize the locks is a 50/50 cost share between the federal government and the users – through the inland waterways trust fund.

Of the modes of transportation, the locks and dams along U.S. inland waterways are most in need of repairs and improvements. Many of the locks and dams were designed nearly a century ago and built to last 50 years, have surpassed their 50-year design life and nearly half of vessels experience delays. In this 10-minute documentary featuring the U.S. Army Corps of Engineers, you’ll learn about one lock and dam in critical condition—the LaGrange Lock & Dam, located on the Illinois River.