U.S. freight transport is forecast to grow by 40% over the next two decades. The rapid growth of e-commerce, accelerated by more first-time users during the coronavirus pandemic, could push this demand even further.

The Biden-Harris team have a long tasklist ahead of them when they take the reins in January.

Having a robust plan for how the U.S. will meet this 40% forecast increase in freight while addressing climate commitments set in the Paris Agreement will be a critical priority.

It requires out of the box thinking, and a long-forgotten transport network could prove a vital part of the solution. 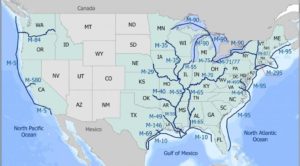 In 2007, toward the tail end of George W. Bush’s Presidential Term, the U.S. Congress amended the Clean Energy Act (also known as the Energy Independence and Security Act), to provide for an alternative to land transport and reduce dependency on oil.

It was designed to utilize waterways and canals across the U.S., as a way to shift freight from road onto waterways. Water transport would reduce emissions by eight times that of trucks and release half the emissions compared to rail freight.

At the time, these efficiency estimates were based on using existing ship energy sources. Transforming these Marine Highways into fully electric or renewable powered-vessels would radically transform these long forgotten transport networks.

Going further and integrating domestic waterways within the U.S. with international maritime trade routes could create green regional trade corridors with major trading nations. If these are built on low-carbon infrastructure and shipping, they could open up a new Green Maritime Super-Highways that could rival China’s Belt and Road initiative for sustainability in marine infrastructure.

With 90% of global trade being transported via the oceans, and shipping being the sixth highest carbon dioxide emitter (three times greater than France), the potential impact on meeting climate targets will be significant.

Depending on which fuel source is used (e.g., wind, solar, green hydrogen or biofuels), this could open up new energy possibilities in the heartland of the United States. Some environmentalists have expressed concerns about another source of fuel, LNG, due to harmful methane emissions at the production stage.

At present, the marine highways program is designed around a North-South axis for cargo transport. A smart, integrated national freight network could find ways for goods to be transported across the country using rail and other low carbon transport modes, and would revitalize the heartland of the U.S. with a range of green maritime transportation hubs.

A package of incentives could encourage e-commerce firms, logistics companies and freight forwarders to start using the marine highway for non-urgent transportation of goods and raw materials.

A clear target would need to be set (for example, at least a third of all internal cargo freight by 2040 should be transported via waterways). It would take strong leadership to deliver on this vision, including integrating Federal support with each State and city along a new Green Marine Highway network, and opening up opportunities to a range of smaller companies to also help drive innovation.