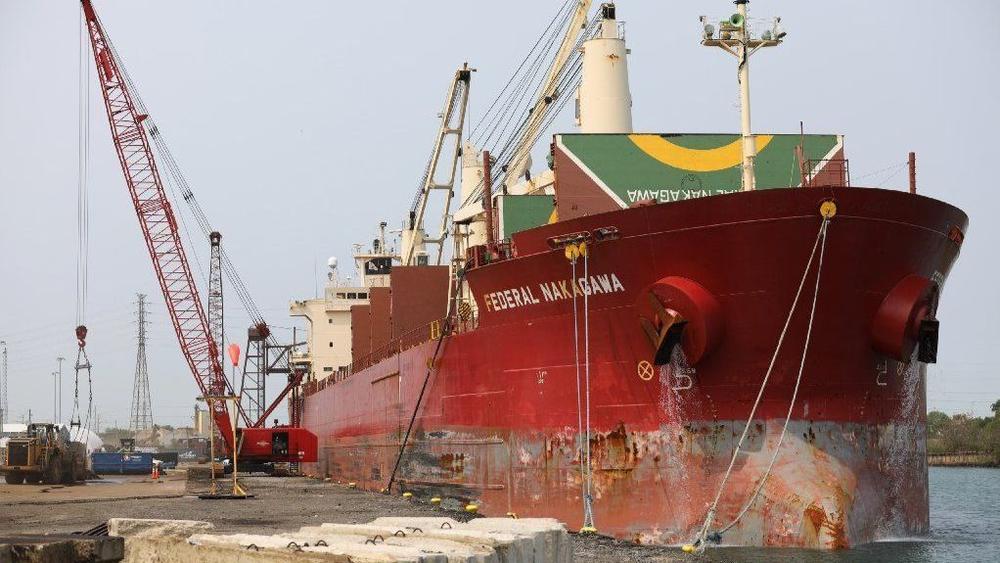 Most Chicagoans look at Lake Michigan and think recreation — a view and a beach, swimming and sailboats.

But the lake is also the site of a major freshwater port that draws oceangoing ships from the St. Lawrence Seaway. The Port of Chicago is in need of money to fix its aging infrastructure, and it hopes to snag a portion of the $35 million earmarked for Illinois ports in Gov. J.B. Pritzker’s capital plan.

At the South Side port, Chicago still looks like the City of Big Shoulders — with barges docked along the Calumet River and a yard heaped with shining piles of steel and aluminum. Lime, chemicals, cement, grain, stone, industrial coke and wood also come through the port, and sugar is delivered to transit storage sheds, processed and put into freight hopper cars on its way to being made into Tootsie Rolls. The port is overseen by the Illinois International Port District, which connects the Great Lakes with the Illinois waterways that lead to the Mississippi River.

A cruise ship official once complained to the district’s executive director, Clayton Harris, III, that the port looked like a “junkyard.” But Harris sees something else.

“From my perspective, it’s beautiful. All this steel, all you see is the economy growing,” said Harris, a former prosecutor and state transportation official who has run the district since 2016.

The district, first established by the Illinois General Assembly in the 1950s, consists of the 190-acre Iroquois Landing at 95th Street, the Calumet River and Lake Michigan, and a 1,600-acre site at Lake Calumet. It also includes a golf course. After years of problems, and a scorching 2013 audit that found sloppy record-keeping and general poor oversight, the port has been slowly making a turnaround. In 2015, the district, which receives no tax money, had $34.4 million in liabilities and an operating loss of $1.1 million, according to a financial statement. This year, it will have $18.8 million in liabilities and an operating income of $800,000.

Harris said the district improved its books by clearing overgrown land to provide more space for tenants to rent, leasing out all its transit sheds — where goods are stored before being shipped out — adjusting contracts and getting the state to cancel a nearly four-decade-old $15 million loan.

Now the district is looking for more money to fix its aging infrastructure.

Harris said he’ll take what he can get, and he’s happy the General Assembly has begun to recognize the ports’ importance to the state’s economy.

“It’s nowhere near what we need — but it’s awesome,” Harris said. “We were never in the conversation before.”

Why $100 million? The district wants $25 million to rehabilitate the Lake Calumet dock wall and another $10 million for paving the roadway between the dock wall and the transit sheds, and the removal of old rail. The district also wants to build new transit sheds, replace the fire suppression system and add about a mile of additional rail at the Lake Calumet facility.