In 1971, a barge hauling newsprint became the first official delivery into the brand new Tulsa Port of Catoosa. In the five decades since, the McClellan-Kerr Arkansas River Navigation System (MKARNS) has grown into a marine highway with an impact to Oklahoma’s economy that is in the billions. As the system prepares to celebrate the big 5-0 in June, the first wave of celebrations is getting underway.

At a virtual event on Feb. 19, Officials, including Secretary of Transportation and Oklahoma Department of Transportation Executive Director Tim Gatz, Chairman of the Board for the Tulsa Port Authority and former Mayor for the City of Tulsa Dewey Bartlett, U.S. Army Corps of Engineers Commander and District Engineer Colonel Scott Preston and port operators along the System, highlighted the importance of the MKARNS to Oklahoma and the region. Between now and the June 5 anniversary, these agencies will join with the ports and operators along this waterway to share the history, the stories, and educational components of the system.

“This waterway is the hidden gem which ties into other various modes of transportation options in Oklahoma, steadily moving commodities such as industrial components and agricultural products efficiently by barge between Oklahoma and the Gulf of Mexico,” Gatz said. “The MKARNS has grown into a reliable trading route to the world and this anniversary is the perfect time to share the stories that make this waterway such an economic success.”

The launch of the celebrations now also ties into an important anniversary for the Tulsa Port of Catoosa which was dedicated on Feb. 20, 1971. The MKARNS itself was officially dedicated on June 5, 1971 by former President Richard Nixon. The waterway was the culmination of years of ambitious planning to create the route along rivers in eastern Oklahoma and through Arkansas before joining the Mississippi River, making it a viable inland route for shipping waterborne commerce. A series of locks and dams along the route made it possible for barges to make the 445-mile trip on the MKARNS to flow to and from the Gulf of Mexico.

At the virtual event, Gatz also gave a sneak peek of new signage that will be placed at all 11 highway and turnpike crossings over the MKARNS channel in eastern Oklahoma by June. The updated signs will prominently feature the “Marine Highway 40” designation, helping to emphasize the major waterway crossing below. The signs will also feature wording to indicate that 2021 is the 50th anniversary of the system. Gatz also announced that starting Monday, ODOT will begin a series of social media posts called “MKARNS Mondays” on its Twitter and Facebook Channels, @OKDOT, which will provide fun facts and photos of the system leading up to the June anniversary. 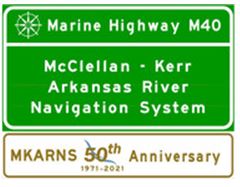