The below terms and definitions are frequently used words associated with maritime transportation along the inland rivers of the United States.

As many of us have learned in the Inland Port Manager class held by the International Association of Marine Port Executives (IAMPE), our industry has its own language and proper terminology is critical in contracts, operations, management, planning and more. Proper terminology eliminates confusion, and like every other profession, it is important in our industry.

Bank: The land alongside the river.

Barge: non-motorized vessel in which commodities are loaded into or on and carried along the waterways. There are multiple types of barges and multiple sizes of barges.

Deck Barges are flat top barges where cargo can be set on flat surface and transported. Deck barges are also commonly used as platforms for workers and machinery as an extension of landside infrastructure.

Hopper Barges are the most standard types of barges for the inland river system.

Tank Barges are used to carry liquid cargoes on the river system.

Berth: The water area, at the waterfront edge of a dock, reserved for a vessel, barge or boat; the place where a barge is tied up when alongside a dock.

Cargo: Goods accepted for transportation by vessels and transported in commercial enterprises, domestic trade or international trade by common carrier.

Dry Bulk Cargo is cargo which may be either loose, granular, free-flowing or solid but is not shipped in package form.

Liquid Bulk Cargo is cargo in liquid form that is carried in large quantities in tank vessels and handled through pumps and piping.

Break-bulk Cargo is general cargo packaged and moved as single parcels or assembled together on pallet boards.

Containerized Cargo is a packaging type in which many types of commodities can be packaged or 'stuffed' into containers and transported via the river system.

Neo-bulk Cargo is cargo that is not containerized, bulk or in break-bulk form.

Channel: Area within the river that contains flowing water and commonly referred to the section of the river where commercial navigation takes place.

Dam: A barrier used to hold back water. This in turn, forms a reservoir where levels can be raised (to hold back water) and lowered (to release water). Dams can be used as a tool for flood control. Dams on the inland river system are commonly used in conjunction with locks, thus referred to locks and dams.

Dredge: A piece of equipment used to remove materials from the bed (or debris from) the river. Dredging is essentially the act of removing the material. Most often, dredging is used to deepen the channel to allow for barges to be fully loaded. There are various forms of dredging, including: mechanical, hopper, cutterhead hydraulic and airlift.

Fleeting: Refers to the action in which a barge is paused along the bank of the river. Fleeting can occur for multiple reasons. A barge could be fleeting while waiting for a tow to come through, or perhaps the barge is waiting to be cleaned and put back into service. Fleeting is essentially a parking lot for barges in the river.

Inland Waterways: Also known as inland rivers, or marine highways, the inland waterways are 12,000 miles of navigable waterways that carry goods to and from 38 states of the nation's heartland. There are multiple beneficiaries of the inland waterways with commercial navigation being a small percentage. Other beneficiaries include: flood control, hydro-power, recreation, ecosystem restoration and water supply.

Intermodal: This is an often misused term reference with cargo. Intermodal is any type of cargo that is transferred from one mode of transportation to another. This should not be confused with multimodal.

Lock: A lock is a piece of infrastructure built in the river used to raise or lower boats, barges and tows between two differing levels of river. Much like a stair step approach, the locks along a river allow river transportation to take place even when the natural slope of the river would not have allowed.

Lock-free River: A free flowing river with no lock infrastructure. The Lower Mississippi River (from St. Louis south) and the Missouri Rivers are lock-free rivers.

Lock Performance Metric System (LPMS): A measurement tool collected at the lock by the Lock Operator of the U.S. Army Corps.

LPMS is data collected by the Corps at each lock site and is primarily used to determine the performance of the lock infrastructure by evaluating cargo passage, vessel traffic, delay times, gate swings and hours of service – all in order to optimize resources to ultimately minimize expenses (industry expenses and Corps expenses).

Pier: A shore side facility to which a ship is secured. A structure used for loading and unloading vessels, which projects into the water.

Port: A facility, either publicly or privately owned, where cargo or passengers for hire are taken on or discharged for transportation by water.

Typically, ports are public entities that offer public infrastructure for the use of transporting freight, including river access, railroad and road. Ports however, can be an operating port, meaning they also transload, store and transport commodities to and from their facility. Typically, public ports are landlord ports in which they lease property to private terminals, who then use the public infrastructure for the benefit of freight transportation.

The primary focus of our inland ports is to grow our economies by providing an access point for multi and inter modal transport – river, rail and road. Many of our exports are generated along the inland river system.  An efficient intermodal freight network to both domestic and international commerce of the U. S. is vital contributions to the integrated freight network.

River: A body of freshwater deep enough for waterway transportation. The river itself is made up of characteristics that allow for commercial navigation, including the depth, bed, banks and in some cases, locks and dams and river structures, including dikes, weirs and chevrons.

The nation's river system, commonly referred to as inland waterways or marine highways, move commerce to and from 38 states throughout the nation's heartland, serve industrial and agricultural centers and facilitate imports and exports at gateway ports on the Gulf Coast.

Shortline Railroad: Class IIII railroads that perform pick-up and delivery services within a port or industrial area and deliver traffic to and from connecting railroads for shipment beyond. They basically serve as the connection between Carrier A and Carrier B. Switching carriers also may have their own locally served customers.

To define a shortline railroad, it really depends, who is asking? To the Class I’s, short lines are customers or, depending on their status, partners in a transportation move from origin to destination. To cargo owners, short lines are a servicer. To ports and terminals, they are partners helping to increase business by offering a multi (in some cases – inter) modal transportation system and, in some cases, logistical or marketing expertise to help the port or terminal grow or they may simply be the railroad that moves freight from barge to the common carrier who moves it by rail beyond.

Terminal: A landside facility, typically privately owned, where cargo or passengers for hire are interchanged between modes of transportation. In many cases, private terminals will lease land from public ports for the use of public infrastructure, however there are hundreds of private facilities along the inland river system that own their own land and are not leased.

Tonnage: Primary metric system used to express the amount of cargo transloaded, transported and carried on the river system.

Tow: A tow is the combination of barges and the vessel pushing the barges. Tows can range from a 12-15 barge and vessel (on locking rivers) up to 45 barges with boat on non-locking rivers. 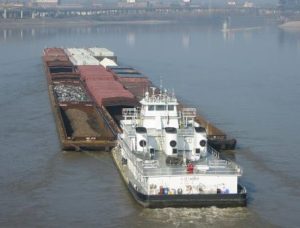 Transload: The movement of cargo from one source to another. For example, when cargo is moved from terminal to barge, or from truck to rail, this is considered 'transload'.

Upland Disposal: The activity of discharging dredged material to a landside area instead of disposing it back into the river.

Vessel Operating Report (VOR): A report to be filed and submitted monthly to the U.S. Army Corps of Engineers containing vessel (boat and barge) moves (origination and destination), type of cargo (including passengers) and volume.