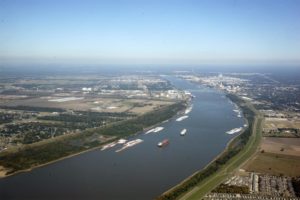 The funding will complete a second project bringing four rail tracks deeper into port property to serve the Louis Dreyfus Company (LDC) Port Allen Elevator facility. LDC’s site, with approximately 80 employees, ships agricultural commodities overseas at a volume of about 5 million tons to 6 million tons per year. The new $20 million rail project will speed delivery, shipment and volume of the commodities, especially at times of high and low stages on the Mississippi river.

“We are pleased to commit the additional state funds needed to facilitate the shipment of critical commodities from Louisiana farmers and other sources through the Port of Greater Baton Rouge,” Edwards said. “These rail enhancements will mean better business and more profitable operations for our farmers, for the port and for major tenants like LDC. All of that boosts our Capital region and state economy. Measured by tonnage, the Port of Greater Baton Rouge is one of three Louisiana ports among the top 10 in the U.S. Our investment in port and maritime infrastructure assures Louisiana of retaining and even expanding our leadership in international commerce.”

Edwards said high river stages at the port interfere with barge offloading. They require companies like LDC to transfer commodities to the elevator facility with additional equipment at a slower pace. Having the option to deliver commodities via unit trains of 110 or more rail cars will benefit agricultural producers and the customers who receive their goods, he noted.

“This is a tremendous economic development project that has been in the works for many years,” said Mike Strain, commissioner of the Louisiana Department of Agriculture and Forestry. “The expanded rail capacity will increase the volume and transfer of goods at a rapid rate. It will also allow for uninterrupted delivery of grain, wood pellets and other commodities when the river levels are too high or too low for normal commerce by barge or ship.”

Operating at the Port of Greater Baton Rouge since June 2011, LDC has completed over $200 million in capital spending improvements at its Port Allen Elevator facilities.

“We are pleased with the rail announcement and the state of Louisiana’s commitment to economic growth in the area,” said Adrian Isman, North America Region chief executive officer for Louis Dreyfus Company. “It is our plan to continue to invest and grow in the region, and the rail line will help support this objective.”

For the Louis Dreyfus Company rail access project, port officials are pursuing a project permit from the U.S. Army Corps of Engineers. Pending approval of permits, construction is expected to begin later this year and potentially be completed in 2020.

Your river news: courtesy of: