NOAA issued its U.S. Spring Outlook today and for the second year in a row, forecasters predict prolonged, persistent drought in the West where below-average precipitation is most likely. NOAA’s Climate Prediction Center — part of the National Weather Service — is also forecasting above-average temperatures for most of the U.S. from the Desert Southwest to the East Coast and north through the Midwest to the Canadian border from April to June. 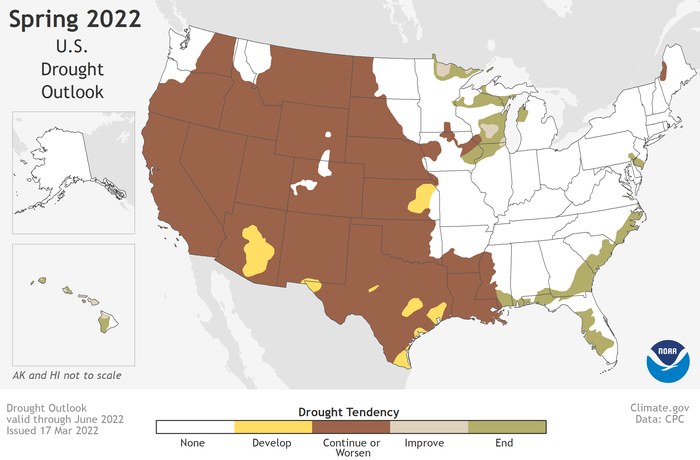 This map depicts where there is a greater than 50% chance of drought persistence, development, or improvement based on short- and long-range statistical and dynamical forecasts during March 18 through June 30, 2022. (NOAA)

“Severe to exceptional drought has persisted in some areas of the West since the summer of 2020 and drought has expanded to the southern Plains and Lower Mississippi Valley,” said Jon Gottschalck, chief, Operational Prediction Branch, NOAA’s Climate Prediction Center. “With nearly 60% of the continental U.S. experiencing minor to exceptional drought conditions, this is the largest drought coverage we’ve seen in the U.S. since 2013.”

Short-term drought recently developed in a region stretching from North Carolina southward through parts of Florida. Dry conditions will bring an elevated risk of wildfires across the Southwest and southern Plains and north to the Central Plains, especially when high winds are present. Drought conditions in the Southwest are unlikely to improve until the late summer monsoon rainfall begins.

This map depicts the locations where there is a greater than 50 percent chance of moderate or minor flooding during March through May, 2022. (NOAA)

“Due to late fall and winter precipitation, which saturated soils and increased streamflows, major flood risk potential is expected for the Red River of the North in North Dakota and James River in South Dakota,” said Ed Clark, director, NOAA’s National Water Center.

Spring snowmelt in the western U.S. is unlikely to cause flooding.

NOAA produces seasonal outlooks to help communities prepare for weather and environmental conditions that are likely during the coming months to minimize impacts on lives and livelihoods. Heavy rainfall at any time can lead to flooding, even in areas where the overall risk is considered low. Rainfall intensity and location can only be accurately forecast days in the future, therefore flood risk can change rapidly. Stay current with flood risk in your area with the latest official watches and warnings at weather.gov. For detailed hydrologic conditions and forecasts, go to water.weather.gov.

Climate, weather, and water affect all life on our ocean planet. NOAA’s mission is to understand and predict our changing environment, from the deep sea to outer space, and to manage and conserve America’s coastal and marine resources. See how NOAA science, services, and stewardship benefit your community: Visit noaa.gov for our latest news and features, and join us on social media.