For many years, Mary Ann Bucci and the Port of Pittsburgh Commission have mostly been able to lobby for improvements to the regions locks and dams in piecemeal fashion — a few million here, a few million there to address problems a bit at a time, always with some money coming from a tax program funded by the industry. That’s why Ms. Bucci knows the $857.7 million to upgrade the Montgomery Locks and Dam in Monaca is completely different: The entire 10-year project is fully funded with funds from the Biden administration’s federal stimulus program.
“What’s important is that this project is funded to completion and it’s 100% federally funded,” she said after federal officials, legislators and labor leaders took a tour of the Beaver County facility Tuesday morning. “Those are two big wins.”
After years of struggling to gain funding “in dribs and drabs,” as Jaime Pinkham, principal deputy assistant secretary of the Army for civil works, put it, the entire $2.3 billion Upper Ohio River Navigation Project is moving ahead. In addition to the Montgomery project, the Army Corps of Engineers is designing $77 million in improvements at Emsworth, and design and construction at Dashields lock and dam in Moon are awaiting funding.
“We can really see this project move now,“ Mr. Pinkham said. “This is a celebration, but believe me, there are many more to come.”
Two years ago, Ms. Bucci expressed concern that without improvements, Montgomery could face a major failure by 2028, interrupting the movement of more than 20 million tons of goods each year. Now, she sees progress at that site and has strong hope about the rest of the Ohio project. 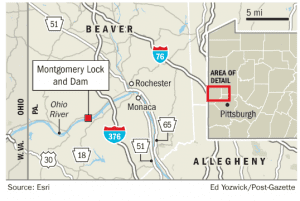 “There has been a lot of stabilization work going on,” she said, noting projects last year and this fall to support walls on the sides of the locks at Montgomery. “We’re not anticipating any failures before this project is finished.”
Col. Adam Czekanski, commander of the Army Corps’ Pittsburgh region, said the massive project is 95% designed, which should be finished next year, and is expected to go out for bids in 2024. Construction on the facility, which opened in 1936, could take as much as 10 years. The project will involve closing the 56-foot-wide, 360-foot-long auxiliary lock, which is on the river side of the facility. It will be replaced by a 100-foot-by-600-foot chamber, matching the size of the main lock adjacent to the river bank.
The complicated construction will involve building a dam around the current auxiliary lock to create a dry space for construction, said Col. Czekanski, whose three-year assignment likely will end just as construction starts. Crews already have started building part of the wall to protect the construction area.
“It’s not ideal [to build this way], but it’s something we’ve done before,” he said. Here’s how large this construction project will be: The corps estimates it will use about 400,000 cubic yards of concrete, enough to fill 15 Olympic-sized swimming pools.
Having all of the construction funds at the start of the project is a big advantage and will allow for a much more efficient project, the colonel said. The corps likely will award one set of contracts at the beginning that will last for the full run of work, which could create as many as 28,000 construction jobs.
Eliminating the smaller auxiliary lock will allow barges to move through the area at a faster pace. The larger lock can move 15 barges through in one hour but the smaller lock would take 15 hours.
The current main chamber at the lock, located 32 miles downriver from Pittsburgh, will remain open during the work.
The tour was part of a nationwide effort by the Biden administration to highlight projects moving forward under the stimulus bill in the ramp up to the mid-term elections in November. Mitch Landrieu, White House senior adviser and infrastructure implementation coordinator, joined Democratic stalwarts U.S. Sen. Bob Casey and  U.S. Rep. Conor Lamb, D-Mt. Lebanon, in Monaca while U.S. Transportation Secretary Pete Buttigieg and other administration officials have scattered across the country to celebrate funding the infrastructure projects.
Mr. Casey and Mr. Lamb stressed that upgrading the lock will send an important signal to the business community. “What we want them to hear is, ‘They have their act together on infrastructure in this region,’” Mr. Lamb said.