HARLINGEN, TX – The Port of Harlingen has significantly increased its regional and state economic impact according to its newest study “Economic Impact of The Port of Harlingen,” conducted by Martin Associates, including doubling its tonnage, job and revenue increases and overall impact.

The Port of Harlingen retained the company to complete an updated study to measure the local and regional impacts supported by maritime cargo at the Port. Impact studies focus on economic data to generate estimates of employment, output, tax revenue, and other measures associated with change in economic activity resulting from a project, or industry under study. The report estimates the direct, indirect (suppliers), and induced (consumer spending) economic impacts of a project or organization. The Port of Harlingen’s study focuses on impacts generated by cargo activity in fiscal year 2021. In total, the terminals at the port handled more than 3.0 million tons of liquid bulk, aggregates, sugar, fertilizer, grains, and cotton. Martin Associates also conducted their 2018 Economic Impact Study.

“Economic impact studies are very important to look at how a port makes its overall impact on a region and its surrounding community. It’s a closer look at how we really affect our economy outside of just tonnage and port revenue,” Port Director Walker Smith said. “It also gives us extra tools and information when we apply for grants and seek support for funding. It shows the full force of what we are doing at The Port of Harlingen and the potential of what we can do.” 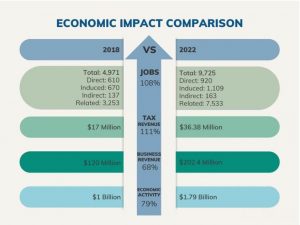 Smith said the attribution of an increase in jobs and uptick in local and state tax dollars is largely due to the liquid bulk flowing through the Port destined for Mexico.

“The terminal operators who deal largely with petroleum bound for Mexico have grown exponentially in the last few years,” he said. “Titan Marine Fuels, alone, went from six employees to more than 200 at the Port of Harlingen to operate. So, although most of their commodity heads for Mexico, the purchase of that fuel, the fees to transport over our docks and roads, the jobs created to operate locally and spending for this operation has greatly impacted Harlingen, the Rio Grande Valley, and the State of Texas.”

For more information, contact Amy Lynch, Director of Public Relations and Marketing, at (956) 423-0283 or at amy@portofharlingen.com . To view the full “Economic Impact of The Port of Harlingen,” click here.