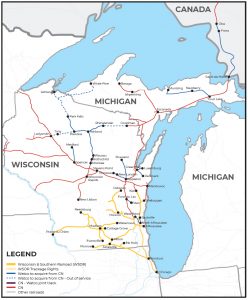 Lines included in the Watco-CN deal approved Monday, as shown in a map issued when the transaction was announced. (Watco)

WASHINGTON — After a lengthy delay sparked by filings in opposition to the deal, the Surface Transportation Board has approved Watco’s purchase of about 650 miles of branch lines in Wisconsin and Michigan from Canadian National-owned Wisconsin Central.

“After careful consideration of all comments received, the board finds that the issues raised do not demonstrate regulation is necessary to carry out the rail transportation policy and that it is appropriate to allow Watco to proceed” with an exemption from STB regulation of the deal, the board said in a Monday press release. Such exemptions are commonly granted when Class I carriers spin off routes to short lines.

Watco will operate the line with its Michigan-based Grand Elk Railroad and its newly created Fox Valley & Lake Superior Rail System. Watco is likely to begin operation of the lines in early 2022.

The board’s full decision turned down requests to impose conditions on the deal — specifically, sale of one line to a local entity to allow shippers access to other railroads — saying there was no indication the sale would result in “clear, anticompetitive effects.” The board also said granting an exemption “will minimize the need for federal regulatory control over the rail transportation system.”

Watco and CN announced the deal in March [see “Watco purchases lines in Wisconsin, Michigan …,” Trains News Wire, March 30, 2021]. But in response to concerns voiced by shippers and U.S. Rep. Tom Tiffany (R-Wis.), the STB put the deal on hold in April [see “STB delays Watco’s acquisition …,” News Wire, April 27, 2021]. The resulting lack of movement led to filings by CN and Watco in October urging the board to act so work needed to launch new service could be performed before the arrival of winter [see “CN, Watco ask STB to unfreeze …,” News Wire, Oct. 12, 2021].