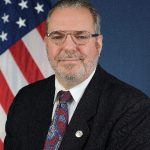 Before coming to MARAD, Tim worked for over 20 years at the Navy’s Military Sealift Command as the Transportation Officer.  His office chartered commercial ships and activated ships from the government-owned surge fleet to support operations and exercises around the world.  He is also a retired naval reserve officer, who served 23 years as a Supply Corps Officer.

Tim is a graduate of West Virginia University’s Institute of Technology and has a master’s degree from the Naval War College in Newport, RI.  He is married to Dr. Yana Rachinskaya and they reside in Owings Mills, MD.